O Sierra Clubfounded in California, will turn 130 on Saturday, May 28th. It is one of the oldest non-profit organizations but is struggling with its history.

The Sierra Club was founded on May 28, 1892, with John Muir as its first president. His first order of business was to defeat a proposal to reduce the boundaries of Yosemite National Park.

Today the history of the Sierra Club is being reformulated. A note on the organization website says: “We are reviewing this section of our website, which presents the history of the Sierra Club in an insensitive and exclusive way. We pledge to engage more critically with our past and to take into account the ways in which racism, sexism, and other systems of oppression have shaped our organization. Please check back soon to see an updated page “.

The club, which has 60 chapters across the country (13 in California) and nearly 1.3 million members, is revaluing its founder, the man known as the father of our national parks.

The Sierra Club issued a formal apology in July 2020 for Muir’s racist remarks more than a century earlier.

Then-CEO Michael Brune said it was “time to tear down some of our own monuments” when statues of Confederate officers and settlers fell across the United States.

“He made derogatory remarks about blacks and indigenous peoples who were inspired by deeply harmful racist stereotypes, although his views evolved later in his life,” Brune wrote on the group’s website. “As the most iconic figure in the history of the Sierra Club, Muir’s words and actions carry a particularly heavy weight. They continue to hurt and alienate indigenous people and people of color. “

Muir was a good friend of the founder of the American Eugenics Society and many early members of the Sierra Club were also eugenicists, believing that the genetic makeup of humans could be improved by the controlled reproduction of different races and classes of people.

1900: The club begins a program of organized outings, with annual trips to the Sierra Nevada. President Theodore Roosevelt visits Yosemite with Muir, and two years later, the club’s campaign to return management of the Yosemite Valley to the federal government of the state of California is successful.

1910s: The National Park Service is created, with Stephen Mather, a member of the Sierra Club, as its first director. The California legislature passes a law to support the construction of the John Muir Trail in the Sierra Nevada.

The Sierra Club received four out of four stars by Charity Navigator, which analyzes non-profit organizations. In 2021 the club received a score of 95.87 out of 100 possible points.

86.1 cents of every dollar given to the Sierra Club goes to the implementation of conservation programs.

The trail of people?

There is a move to rename the route John Muir. In 2018, seven indigenous women toured the Sierra Nevada in an act of cultural recovery. The route was used by the Sierra tribes for centuries before Muir discovered it, and is known as Nüümü Poyo, or People’s Way.

From north to south, the route begins in Happy Isles in the Yosemite Valley and goes to Mount Whitney, the highest mountain in the contiguous United States. The 221-mile trail ends at Whitney Portal near Lone Pine. Most of the road is above 8,000 feet in a designated desert. Construction took 46 years to complete, beginning in 1938. 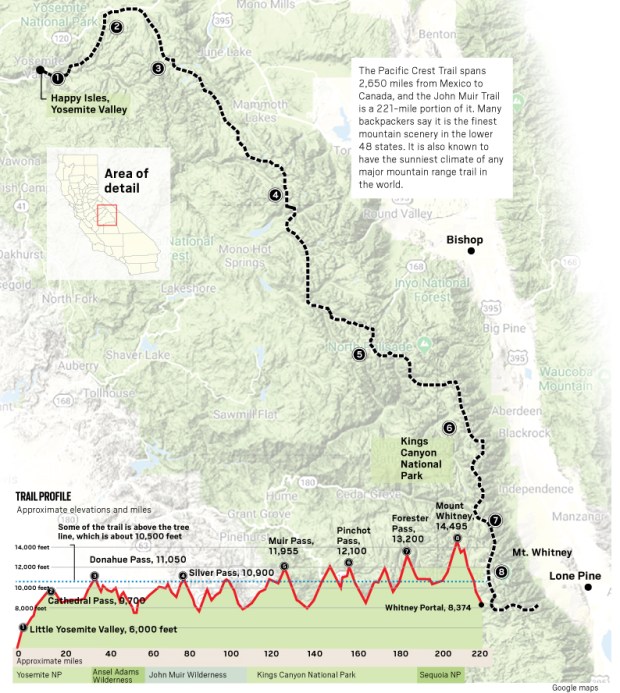 Muir was born in Scotland on April 21, 1838. He first entered the Yosemite Valley in 1868, and his writings on the area encouraged support for land preservation in California and America.

Muir was married, had two daughters, and ran a vegetable garden in Martinez, where his mansion is maintained by the Parks Service.

At least one high school, 21 elementary schools, six high schools and a college bear his name, as well as a glacier, a mountain, a forest, a beach, a hut, a cove, a road, a library, a motel. , a medical center and a smaller planet.

In 1914, Muir died at a hospital in Los Angeles on Christmas Eve.

Muir’s profile – with a long beard, a brimmed hat and a cane, looking at Yosemite’s Half Dome – was stamped in the California neighborhood in 2005 when the U.S. Mint produced a commemorative coin for each state. 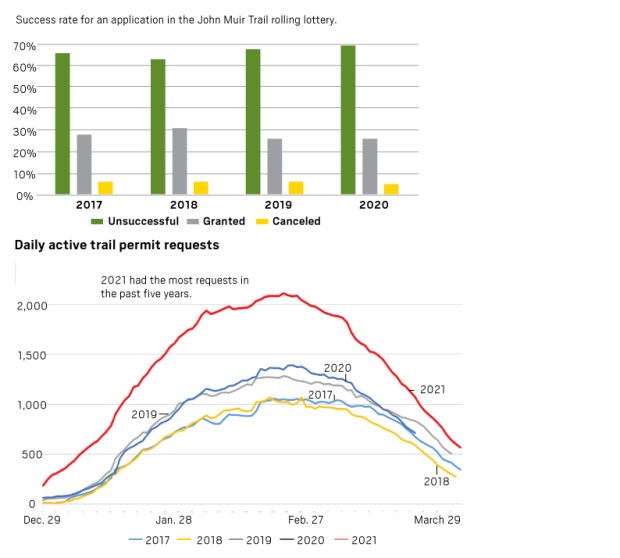 If you are thinking of taking the route, you are not alone and you will need to plan ahead. Wilderness permits in the Sierra Nevada are under a quota system that prevents congestion on the track and protects the environment. John Muir Trail permits go fast. Yosemite Desert Permit Bookings are available 24 weeks (168 days) in advance. Read the John Muir Trail permit page on the Yosemite National Park Service website.