Passengers in the UK will be hit by a summer of travel misery, with London Heathrow Airport chief executive warning it would take up to 18 months for the aviation industry to return to pre-epidemic levels and the largest railway association announced the biggest strike action in 30 years.

There were thousands of vacationers Forsaken Over the past week with hundreds of flights being canceled due to lack of crew and delays in air traffic control.

“I think it will take 12 to 18 months for the aviation sector to fully recover capacity, so we will have to carefully manage supply and demand,” said Heathrow CEO John Holland-Kay. The World Conference Room of the Financial Times conference.

The aviation industry has cut tens of thousands of jobs during the epidemic and is now struggling to recruit new workers after the demand for travel fell very fast this year. Holland-Kay said ministers can help by further easing the rules around security background and checking employment history for new employees.

Meanwhile, the UK rail network will be severely disrupted after the RMT union said more than 40,000 workers would present three days of departures on 21, 23 and 25 June.

The union said initial protests would “shut down” the entire network after it failed to reach an agreement with infrastructure operator Network Rail and more than a dozen train operators. RMT leader Mick Lynch has promised an “ongoing campaign” of action, suggesting the union may declare more strikes over the summer.

Industry leaders said that by stopping stops, the train network would be severely damaged in the days between the three breaks because the crew would not have arrived at their shifts the night before.

“We’re actually out for a week,” said one of the principals. The strike action is more harmful than previous outages because it includes Network Rail signals.

Freight will be preferred on the railways during the strike to ensure that the supply chain continues to operate, and intercity services are given priority over passenger trains, according to people familiar with the industry Emergency plan.

One railway company said it expects to operate between 20 and 30 percent of its schedule on strike days.

“While we will continue to operate as many services as possible, unfortunately if this operation is implemented, a significant disruption will be inevitable,” said Steve Montgomery, chairman of the Railways Group, an industrial body.

The RMT is at the forefront of a “summer of dissatisfaction” that could also include industrial action by two other rail unions, the TSSA and Asalf. He said railway companies and ministers would have to make new proposals if they wanted to avoid “months of disruption”.

The unions are protesting against a multi-year wage freeze and the possibility of thousands of cuts.

“Despite intensive talks with train chiefs, RMT has failed to secure a wage offer or a promise of binding dismissals,” the statement said. The union also declared a local strike on the London Underground on 21 June. 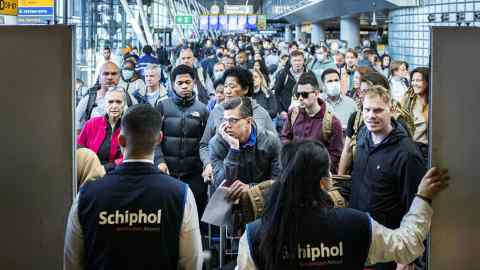 Transport Secretary Grant Schaps said the announcement was “incredibly disappointing” and warned that the move could keep passengers off the train network just as it begins to recover from the epidemic.

The RMT announcement comes amid rising industrial unrest, as inflation erodes workers’ profits and many employers struggle to fill vacancies. The CWU Communications Workers Union warned on Tuesday that a pay dispute at the Royal Mail may also lead to a vote on a nationwide strike action.

On Monday, 500 British Airways workers began to vote on whether to strike continuously because of wages, with the union warning that it would schedule any industrial action with the summer break to cause maximum disruption.

In West Yorkshire about 700 bus workers, including drivers and engineers, have been on strike indefinitely since Monday, demanding a 10% wage increase from Arriva operator. The toilets were suspended as a result.

Phil Brown, a regional officer at Unite, said strikes are now also taking place in response to Arriva’s wage offers in the North West and North East of England.