A brush fire burned an acre in the Angels National Forest on Wednesday, prompting the brush’s response to the first warning from firefighters.

The brush fire was first reported at 1:01 pm near the intersection of Lake Hughes Road and Drygarch Road, east of Lake Castaic.

At 1:20 pm, a spokesman for the Los Angeles County Fire Department, Henry Narvaez, said, “The first report of the fire was one acre of medium fuel downhill with a wind of 5 miles per hour. “.

By 1:30 pm, fire department officials reported that the flame had grown to two acres with medium to heavy fuel, but some of the responding units could be released from the phone.

“We have canceled most of our resources,” Narvaez said at 1:35 pm.

Advance was called at 1:53 pm #DryFire.. Located on 2 acres of land, all in the woods, the structure is undamaged. The first report showed that there was a problem with the possibility of arson. @SCVSHERIFF Make sure that at least one person has been detained in the area. https://t.co/1sjWF3lxm4

Fixed-wing aircraft, bulldozers, and auxiliary fire trucks, which were part of the initial alert, were discontinued within 30 minutes of the report, but a few county fire department and Angels National Forest personnel remained on the scene, with a few. Vehicles and at least one helicopter.

A representative of the Santa Clarita Valley Sheriff’s Office also responded to the scene after receiving reports that the arsonist had ignited the flames.

“We are not detained, but we are detained,” said Natalie Aliaga, a spokeswoman for the Santa Clarita Valley Sheriff’s Office at the time of the incident. “He was seen near the area.” 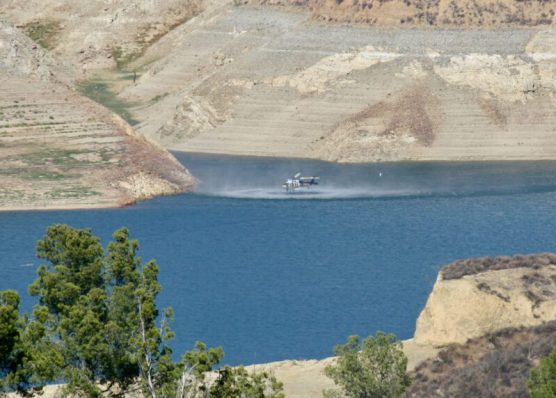 However, the detained man was eventually not booked at the SCV Security Office and was subsequently released by law enforcement officers, Arriaga said late Wednesday afternoon.

“They detained someone, who was not arrested. He was interrogated and released,” he said. Daniel Tobin of the Los Angeles County Sheriff’s Bureau of Arson / Explosives details added that the fire investigation was being handled by the Angeles National Forest authorities because the burned area was in a forest area.

On their way to the scene of the fire, they reported seeing a smoke eruption from a distance towards the other side.

Overlooking Lake Castaic on Wednesday, you can see smoke from #DryFire. Photo courtesy of Josh Runyan

“It started as a small stream of white smoke and then grew to a much larger one,” said Josh Lunyan, who worked on a hill overlooking Lake Castique when the fire first broke out. “The plane came for a short time after seeing three helicopters fighting it, but I think the helicopter was in control.”

Runyan said the aviation unit made a short trip to refill water — refilled at Castaic Lake — and made a “quite fast reaction” for it.

At 1:53 pm, the advance stopped at about two acres, and firefighters completely surrounded the burn area with handlines and hoselines.

The fire burned completely in the forest and was handled by the staff of the Angeles National Forest.

The fire was called #DryFire or #DryIC by first responders.