A pregnant woman hit by a Russian airstrike on a children’s hospital and maternity ward in the Ukrainian city of Mariupol last Wednesday has died along with her baby.

A photo of the woman being evacuated from the hospital on a stretcher, taken by photographer Evgeniy Maloletka for the Associated Press, was widely circulated and became a symbol of Russia’s increasingly brutal tactics in its invasion of Ukraine.

Timur Marin, the surgeon who treated the woman, told the AP the baby was delivered via caesarean section but showed no signs of life. Marin said doctors then tried to resuscitate the mother, who had a crushed pelvis and severed hip.

“More than 30 minutes of maternal resuscitation yielded no results,” Marin told the AP. “Both died.”

The March 9 airstrike destroyed a maternity hospital, a children’s ward and a treatment center. After the attack, the woman was taken to another hospital, where doctors tried to keep her alive.

According to the AP, medics were unable to record the woman’s name before her husband and father arrived to collect her body. Doctors said she was not buried mass graves which the local authorities use due to the number of deaths in Mariupol.

The humanitarian situation in the port city Mariupol has worsened as hundreds of thousands of residents have been trapped under heavy bombardment without electricity, heat, water or communications since early March. Water, medicines and other essential goods are running out.

“It’s a war crime because under international law you can’t attack healthcare facilities,” Javid told Sky News on Monday. “The World Health Organization . . .[has]documented evidence of at least 31 such attacks.” 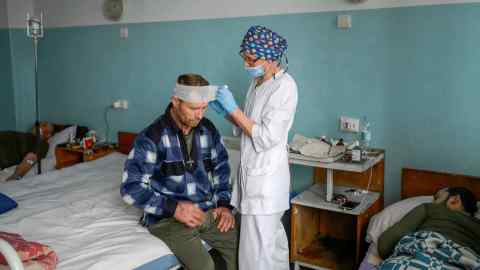 The Russian embassy in Britain claimed photos of the Mariupol hospital bombing were staged in a series of social media posts. The embassy also claimed the pregnant woman was an actress. Twitter and Facebook removed the Russian embassy’s posts last Thursday, saying they violated company policy.

In the past week there have been three attempts to evacuate citizens from Mariupol. Ukrainian officials have accused Russian forces of attacking evacuation columns.

However, Russian forces have allowed some of those trapped in the Sea of ​​Azov city to evacuate as Russian and Ukrainian negotiators resumed peace talks. More than 160 private cars left the city, evacuating civilians towards Zaporizhia, the Mariupol City Council said. But hundreds of thousands of people remain trapped.