They work in hospitals. They have easy access to jabs. They know the risks. Yet after a frenetic rollout and urgent pleas from officials on nearly-bent knees, almost a quarter of California’s hospital workers remained unvaccinated for COVID-19, according to federal data.

Vaccine hesitancy is far more pronounced at some hospitals than at others, and may reflect a community’s affluence — or lack thereof.

At Redlands Community Hospital, 42% of workers were not vaccinated as of July 16, according to federal data. At Kaiser Foundation Hospital West L.A., 33% were unvaccinated. At Kaiser Foundation Hospital Riverside, 29%. Officials said about 30% of employees at Los Angeles County hospitals — including  “safety net” facilities that care for uninsured and underinsured patients — were still unvaccinated, though federal figures put the unvaccinated rate far closer to 50% at County USC Medical Center in Los Angeles and County Olive View-UCLA Medical Center in Sylmar, and at 38% at County Harbor-UCLA Medical Center near Torrance.

The scenario is strikingly different elsewhere.

Just 5% of workers remained unvaccinated at MemorialCare Miller Children’s & Women’s Hospital in Long Beach, and only 4.7% were un-jabbed at Long Beach Memorial Medical Center, according to the data.

Data was missing for many California hospitals, and some officials disputed the numbers reported for them. But enough large hospitals confirmed the numbers to support an overarching conclusion: Hospital workers are people, too, and a great many of them remain unvaccinated, despite their labor in health care facilities treating patients in fragile conditions.

“I’m not entirely surprised — but I am disappointed,” said Andrew Noymer, an epidemiologist and demographer at UCI Irvine who studies infectious diseases. 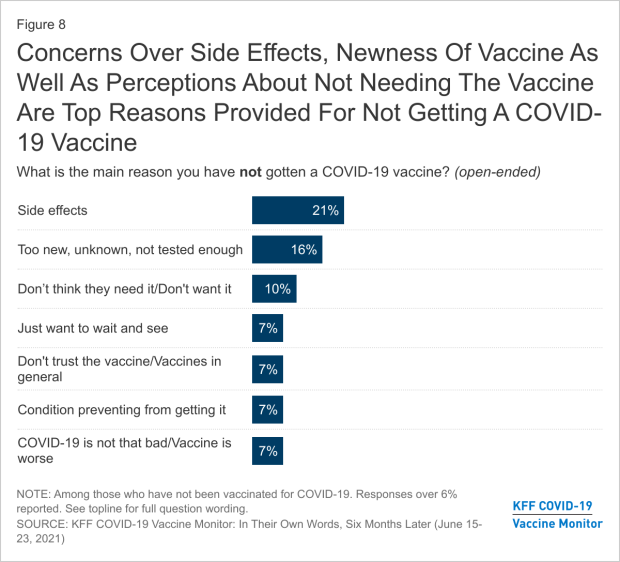 Not all hospital workers are highly educated medical professionals like doctors and nurses, said Richard Carpiano, a public health scientist and medical sociologist at UC Riverside. There’s administrative staff, secretaries, janitorial workers, bookkeepers, cafeteria personnel and other support people who keep the doors open and the lights on. They’re apt to reflect the attitudes — and fears — of the public at large.

Indeed, the Los Angeles County Department of Health Services said its fully vaccinated rate for employees closely mirrors the general population of the county, which is 70.9% for those ages 16 and up.

“Health care workers are human beings,” said Courtney A. Gidengil, senior physician policy researcher at the RAND Corp. and assistant professor of pediatrics at Harvard Medical School. “Theoretically, they should be able to get as much information as they want — but they’re prey to the same misinformation that other people are exposed to about vaccines. They’re a microcosm of what we’re seeing in the larger population.” 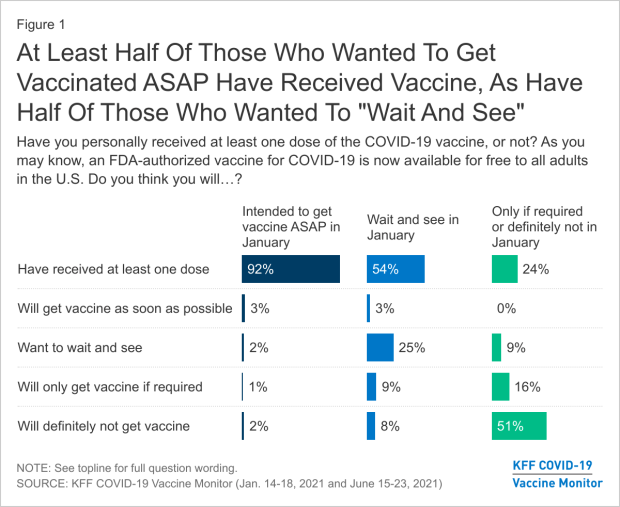 Polling by the Kaiser Family Foundation has found that people without college degrees are more likely to be hesitant about getting jabbed, said Liz Hamel, vice president and director of public opinion research for KFF.

“There’s a chunk of the population that’s hardcore holdouts — ‘I’d rather get continuous testing than get this vaccine,’ ” Hamel said. “One of the concerns among people who haven’t been vaccinated is being required to even when they don’t want to — but in a setting like a hospital, you could argue that protecting the health of everyone outweighs those concerns.”

Gidengil, of RAND, agrees that hospitals have a heightened responsibility to protect the sick and injured seeking care. “Anywhere there is less protection for patients, there’s a legitimate concern,” Gidengil said. “It’s an important question to ask.”

Hesitancy inside hospitals underscores the rationale for requiring vaccination for health care workers and a broad cross-section of other public-facing workers — but there will still be many fights ahead.

The big concern right now, Centers for Disease Control Director Rochelle Walensky said last week, is that the virus might morph enough to evade vaccine protections, meaning a more elusive variant could be just a few mutations away.

Hospitalizations are surging as well, hitting nearly 4,000 in California last week, up from fewer than 1,200 in mid-June.

While up to a quarter of new cases are showing up in vaccinated people, they are far less likely to get very sick. The overwhelming majority of very sick COVID-19 patients — as high as 92 percent, according to recent surveys — were never jabbed, leading Walensky and others to dub the current outbreak “a pandemic of the unvaccinated.”

In the big picture, California is doing better than most. Nearly 72% of Californians ages 12 and older have had at least one shot, according to state data. And the current surge is nowhere near as high as cases climbed over the winter. But as the more contagious delta variant spreads, even among the vaccinated, the issue takes on heightened importance.

“The vaccines are the most powerful tool we have at our disposal to combat COVID-19,” said RAND’s Gidengil. “They’re really effective at preventing hospitalization and death. Especially in a hospital setting, we have a responsibility to our patients to keep them safe. There’s a compelling case to be made to do whatever possible to get everyone vaccinated.”

And that’s precisely what officials are doing.

On July 26, Gov. Gavin Newsom required all state workers — and workers in health care and high-risk congregate settings like nursing homes — to either show proof of full vaccination or be tested at least once per week. President Joe Biden announced a similar plan on July 29, requiring all federal employees to be vaccinated or face new testing, masking and distancing rules.

That might push some holdouts to finally acquiesce, but many workers object.

From police: “(F)orcing people to undertake a medical procedure is not the American way and is a clear civil rights violation no matter how proponents may seek to justify it,” said the Federal Law Enforcement Officers Association in a statement.

From letter carriers: “(I)t is not the role of the federal government to mandate vaccinations for the employees we represent,” said the American Postal Workers Union in a statement.

From vaccine opponents: A vaccine mandate “violates both the U.S. Constitution and the Nuremberg Code, which clearly states that informed consent is essential in medical experimentation,” said the Children’s Health Defense in a statement.

Carpiano, for one, has little patience left for this. “Cases are going up, and even if cases weren’t going up, these are health care facilities,” he said. “They have a responsibility to provide as safe an environment for patients and employees as possible.

“Thinking from a pure disaster response preparedness standpoint, we can’t afford to have hospitals undermined because of a spike in the delta variant. They’re too much of a critical resource.”

Kaiser’s Hamel expects the new federal, state and local vaccine and testing requirements to ripple out to other employers and move the vaccination-uptake needle a little bit. When the vaccines get full approval from the Food and Drug Administration — rather than the emergency-use authorization they currently have — that will move the needle a little bit, too. 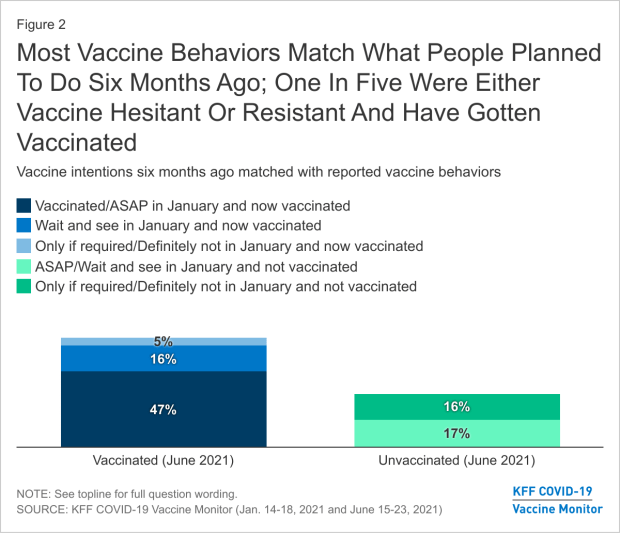 “But there’s no silver bullet anymore,” she said. “All the low-hanging fruit has been picked. Now it’s a matter of moving incrementally, using many different strategies.”

Houston Methodist was one of the first health systems to require coronavirus shots as a condition of employment. Holdouts sued, saying the hospital couldn’t force them to be guinea pigs. The suit was thrown out in federal court.

“This is not coercion,” U.S. District Judge Lynn Hughes wrote in June. “Methodist is trying to do their business of saving lives without giving them the COVID-19 virus. It is a choice made to keep staff, patients, and their families safer.”

Hospital officials from all over Southern California said the health and safety of their workforce and patients is their overarching priority, and that they’ll comply with the new health orders requiring all workers to show proof of full vaccination or be tested twice weekly.

At Kaiser Permanente, California’s largest health care provider, officials support Gov. Gavin Newsom’s “strong and timely action” to require that all state and health care workers show proof of vaccination or be tested regularly, a spokesman said by email. All employees will be required to verify their vaccination status, and all employers should move to do the same things to ensure the health and safety of their employees, customers and communities.

Kaiser is “encouraged” to see that the majority of its front-line health care workers have been vaccinated, “a critical first step in the societywide vaccination that will be required to control and eventually end this terrible pandemic.” Vaccine education efforts will continue, and the health care giant will continue to evaluate policies and procedures to maintain the highest levels of safety, it said.

The L.A. County Department of Health Services began vaccination clinics for employees and contractors in December, and workers have been encouraged to get jabbed during work hours, a spokesperson said by email. Education efforts have included virtual town halls with expert physicians and one-on-one access to experts who can address specific health concerns.

The federal data showing high unvaccinated rates for three hospitals is not comprehensive, officials said. L.A. Health Services encompasses four hospitals, 24 clinics and an administrative central office, and its records show that 73% of employees and 30% of the contractor workforce have been fully vaccinated. If employees or contractors got shots from an outside entity and haven’t provided proof yet, they’ll show as “unvaccinated.” Like others, the department is gathering proof of vaccination status from workers and contractors.

At Redlands Community Hospital, where 58% of employees are vaccinated, and at Torrance Memorial Medical Center, where 80% are vaccinated, on-site vaccination clinics are offered to staff, officials said.

At Garden Grove Hospital Medical Center, Huntington Beach Hospital, La Palma Intercommunity Hospital and West Anaheim Medical Center — all Prime Healthcare facilities — vaccines will not be mandated for employees at this point, but “we are strongly advocating that all members of our healthcare team lead by example by receiving the vaccine,” said business development and marketing manager Cristal Gonzalez by email. “We continue to educate staff on the importance of vaccinations. COVID-19 vaccines have proven to be safe and highly effective at preventing transmission, hospitalizations, and death from the virus.”

Huntington Hospital officials said it has been at the forefront of providing health care workers early access to the vaccine and went on to help vaccinate the community at a hospital clinic and community pop-up sites in underserved areas. It will comply with the new state order, but is exploring the best way to do that, including “careful and thorough evaluation of medical and religious accommodations.”

“Our ongoing advocacy for vaccination includes education and targeted outreach to the vaccine hesitant. We strongly encourage everyone to receive the vaccine, as vaccination is the single most effective way to prevent severe illness and death from COVID-19,” a spokesperson said by email.

And at MemorialCare, the hospital chain that had some of the highest vaccinate rates among workers in Southern California, officials attributed that success to strong and early advocating for the vaccine, worker education and on-site clinics open for extended hours. The small number of employees and physicians who are not vaccinated will follow the mandate of testing twice a week, and care teams will continue to strictly adhere to its PPE policies and code of conduct, said Helen Macfie, senior vice president and chief transformation officer.

The time for half-measures is over, said UCR’s Carpiano. On Friday, July 30, CDC documents surfaced noting that “the war has changed” and that the delta variant is about as contagious as chickenpox.

“We’ve had a lot of carrots,” he said. “It’s time for some sticks — or at least, some pushes and nudges to get things going. If we want to return to any sense of normalcy, we have to be vaccinated.”